Energetic toddler? How to find out if your toddler has ADHD

Detecting ADHD in toddlers can be pretty tricky because a lot of their normal behaviours can be ADHD-like. Trouble paying attention. Nonstop energy. Impatience (if they want something, they usually want it now). Being overly dramatic with full blown meltdowns at the slightest thing (like when their cookie breaks in half). If you are worried, it is important to find out if your toddler has ADHD or if their behaviours are normal.

Toddlers can have ADHD

No, the terrible twos (or threes) is not the same as ADHD. Some of those kids can at least focus long enough to flip through a picture book or eat their snack.

Nonetheless, ADHD in toddlers is real. For those kids who do have ADHD, early intervention is critical. We know long-term outcomes of ADHD can be detrimental if it is not managed effectively.

Given the long-term risks, if you are worried, you need to find out if your toddler has ADHD to maximize their potential and success in all environments.

Professional organizations such as the American Academy of Pediatrics recommend screening children for ADHD when they are 4. There are no guidelines for those younger kids. However, according to agencies such as the Centers for Disease Control and Prevention (CDC) and the Mayo Clinic, we can start see symptoms as young as 2 (or, in some cases, even earlier).

Severe behaviours are easier to detect

In my experience, most of these younger kids who are diagnosed have severe behaviours, which are easier to spot.

Their hyperactive and impulsive behaviours makes them walking safety hazards. And too-in-your-face, preventing other kids from wanting to play with them.

Or they just never stop, constantly on the go and/or talking nonstop, leaving adults exhausted. They likely have trouble getting to sleep and just seem to need less rest than others.

But, some kids still get missed even when they show early signs

Some kids show early signs, but the majority of children are diagnosed between the ages of 8-11. Others do not get diagnosed until even senior high because they found a way to cope with everyday demands until then.

However, I work with a lot of these teens who got later diagnoses and realize that it took a lot of effort and emotional toll to get by. And by the time they are diagnosed, they feel frustrated, their self-esteem has taken a blow, they feel like they can’t do anything, and they feel pretty hopeless.

My daughter is, unfortunately, a great example. I knew from the time she was in my womb that I had a very active child with her constant kicking and somersaulting.

As an infant, she rarely slept. She was a quick 20-minute napper at best. I had to give up naps before her first birthday because any amount of sleep during the day – even a quick nap – meant she did not sleep at all at night.

She was also a terrible eater. I was constantly getting help with nursing, worried she was starving because she would not nurse for more than 2 minutes at a time. I was constantly amazed how long other mothers had to sit to nurse their baby.

Maya, however, was too impatient to nurse. And, easily distracted. I had to use one of those nursing covers not for privacy but to help her avoid distraction. Needless to say, she hated it and always tried to rip it off once she was able to grab it.

By the time she was 3 months old she was a mover and a shaker. I constantly got teased (well, shamed really) by the other moms because she could pull herself to the other helpless babies and take their toys (that they weren’t actually playing with anyway – they were just laying next to them). From then on, she was labelled a “bully.”

I remember our first Halloween our baby group had a party. Maya was 7 months old then and she was already bombing around, walking behind with a push toy. Most of other babies could at least sit by then, but none were moving yet. Let alone stand. Let alone walk. One mom sarcastically said, “Wow, I am amazed your daughter doesn’t have her driver’s license yet.”

By the time she was 3, I knew for sure she had ADHD. However, people kept telling me to wait. She was just active. And imaginative. Over time she tried her best to hold things together and seemed to do ok. And so, we waited.

But, we waited too long. Her self-esteem plummeted and the demands of school became so great she felt like a failure. We finally agreed to try medications when she asked if there was anything to cure her self-diagnosed a “spazzy brain disorder.”

While medications changed her world (for the better), her self-esteem still suffers and she has lost her confidence socially, which was always one of her greatest strengths. Looking back, I wish I had done more when I saw those early signs. But they weren’t severe and she seemed to be doing ok.

We know early intervention is important. And, from my personal and professional experience, I cannot stress it enough. Unfortunately, only about 40-50% of young children with ADHD actually receive the early intervention support they need.

Part of the problem is knowing the early warning signs in the first place, and then taking action to do something about them.

Know the signs if your toddler has ADHD

Early on, the first common signs to watch out for in babies includes:

These do not necessarily mean your child has ADHD but can be early warning signs. To be formally diagnosed, kids need to exhibit symptoms in at least one of two key areas.

Unfortunately, inattention is pretty common for toddlers, so that one is tricky to determine. But, your toddler may have substantial trouble focusing on any one thing, have trouble listening long enough to a story, and/or have trouble settling down, such as to nap.

Again, many toddlers can be hyperactive and/or impulsive. But, watch to see if your child seems to have more difficulties than other kids the same age with the following sorts of behaviours that seems to cause disruption:

For these behaviours to be diagnosed with ADHD, they need to be more frequent and severe than other kids their age. They also tend to occur in different settings, such as at home, a friend’s house, or a restaurant. And, these behaviours need to persist for at least six months.

What to do if you are concerned your toddler has ADHD

If you are concerned at all, get on it right away. Yes, every child’s brain is unique and the rate their brain develops can vary greatly from one child to the next.

However, if there truly is ADHD, the wait-and-see approach is never a good one to take. If it is ADHD, there are real differences in their brains. Waiting too long can place a great burden on kids and make it harder later on. Like my daughter, many of these kids pay a big price socially, emotionally, and academically.

First, see your doctor if you have any concerns. Sometimes kids have other difficulties, such as developmental delays, anxiety, hearing difficulties, or sleep disturbances can look like they have ADHD.

Either way, any difficulty needs to be addressed. Your child’s overall health should be checked thoroughly to rule out anything that could be going on medically. Your doctor will also likely consider risk factors that can contribute to ADHD.

If your doctor believes your child may have ADHD, they likely will not prescribe medication. Many doctors don’t like prescribing before 6. Some are comfortable giving medications at 4. I have seen even younger in extreme cases. They may, however, refer you to get a full assessment and to access early intervention supports.

Find a psychologist or other professional who works with young children with ADHD and their families. They can help you understand the behaviours you are seeing, your child’s needs, and the skills they can learn.

They can also get started on behaviour therapy, which is the first line of treatment for ADHD for young children. You will learn strategies you can use to manage problematic behaviours, to communicate effectively with your child, and to promote your relationship. Strategies that are good for any parents with any kids, regardless if they have ADHD or not.

In the meantime, here are a few things you can started on right away on your own as you wait to see a professional. 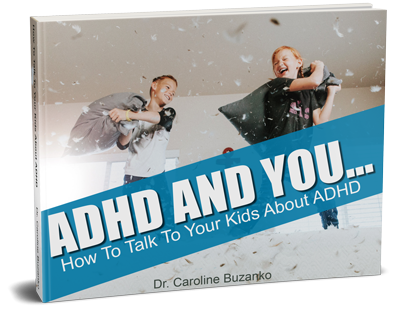